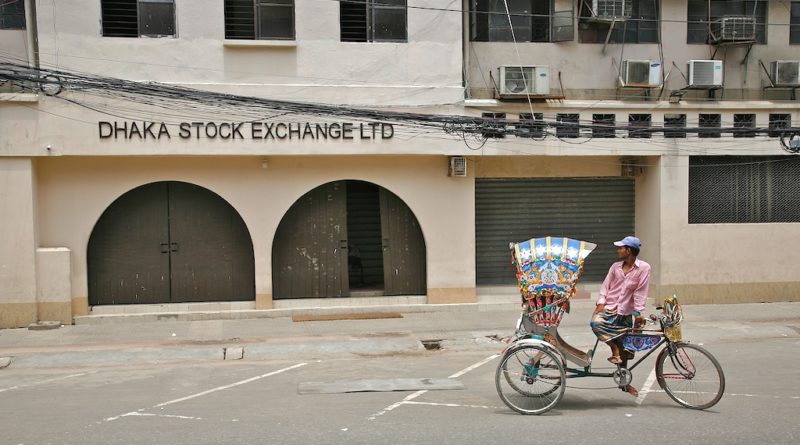 Dhaka stocks continued to plunge on Thursday, stretching the losing streak to the sixth session, amid rampant panic sales over concerns about the banking sector following the central bank’s order to cut the lending rate to single-digit.

The DSEX lost 277 points in the last six sessions, almost nullifying the recent gains over the central bank’s move to allow banks to form special low-interest funds for the stock market.

Market operators said that investors on Thursday continued to ditch shares, especially those of banks over fear of the adverse impacts of the forced lending rate cut on the financial sector.

The Bangladesh Bank on Monday announced that the 9-per cent cap on the lending rate on all loans, except credit cards, would come into effect from April 1.

The government earlier fixed the deposit rate at 6 per cent with effect from the set date.

They said that the profit margins and dividend providing capacity of the banks would be hit because of the sudden cut in the interest rate.

Market analysts said that depositors would be reluctant to keep funds at the banks at 6 per cent interest, knocking down credit growth in the struggling private sector.

DSE director Shakil Rizvi told New Age that the banks were going through a transitional period and it would take time for them to absorb the sudden shock of the interest rate cut.

He also said that the banks which had huge exposure to SME businesses were said to be affected the most. ‘Thus, the share price of BRAC Bank was falling continuously.’

Rizvi, however, said that when new deposits would start to pour in, the banks were expected to get some relief from the shock.

Besides, the media reported that the recent coronavirus outbreak in China that has been spreading to other countries world over would affect the country’s import-export business.

After a substantial gain riding on the BB’s permission to set up special funds for the stock market, the DSEX initially started to fall on the investors’ profit taking sell-offs in the third week of February.

But the market went into a tailspin again following the BB’s interest rate policy coupled with the court order directing Grameenphone to pay another Tk 1,000 crore in audit claims.

The BB on February 10 allowed each bank to borrow up to Tk 200 crore from the central bank on easy terms to invest in the capital market, but no visible move has been seen from the banks yet in this regard.

EBL Securities in its daily market commentary said, ‘Indices of the DSE plunged with its prime index DSEX, which registered a 68.88-point loss and settled at 4,480 points today amidst a confidence crunch exacerbated by the banks’ interest rate cut and GP’s crisis in settling audit claim to obtain NOC.’

‘The index coped with a bumpy ride, in the beginning, followed the previous five days’ recession but could not uphold the beat and settled in negative territory due to panic-driven sell-offs mostly in telecommunication, fuel & power and bank sectors,’ it said.

Average share prices of all the sectors dropped on the day.

Share prices of telecommunication, energy, banks and non-bank financial institutions dropped by 4.7 per cent, 1.8 per cent, 1.5 per cent and 0.8 per cent respectively.

Out of 30 bank scrips traded on the market on the day, prices of 23 declined, just three advanced and four remained unchanged.

Meanwhile, Ring Shine Textiles managing director Sung Wey Min, also the chairman of Universe Knitting Garments Limited, a placement holder of the company, on Thursday declared its intention to sell off 36.86 lakh shares at the existing market price on the block market.

The turnover on the DSE dropped to Tk 561.41 crore on Thursday from Tk 627.34 crore in the previous trading session.

Out of the 356 scrips traded on Thursday, 250 declined, 60 advanced and 46 remained unchanged.

BRAC Bank led the turnover chart with shares worth Tk 30.78 crore changing hands on the day.

Central Pharmaceuticals gained the most on the day with a 9.56-per cent increase in its share prices while Standard Ceramics fared the worst, dropping 8.7 per cent. (Source: New Age)