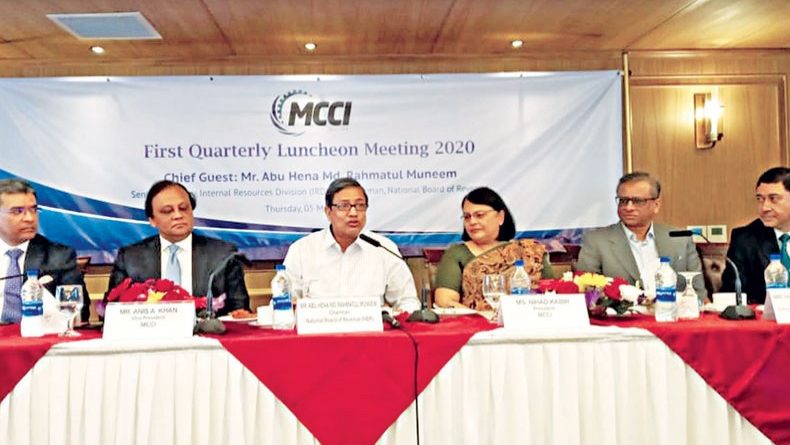 National Board of Revenue chairman Abu Hena Md Rahmatul Muneem on Thursday said that they would review the justification of the existing ratio of advance income tax on import of products to profits made from the import.

‘It is very difficult even for me to determine the justification of the ratio of AIT to profits a company makes from selling imported goods or selling finished goods produced from imported materials,’ he said following a demand of the Metropolitan Chamber of Commerce and Industry for a reduction in the rate of AIT.

He made the comment at the first quarterly luncheon meeting of 2020 of the MCCI, held at its Gulshan office in the capital.

Muneem said that he would try to reach a conclusion on the issue after discussions with the stakeholders and tax officials.

‘We should check whether the ratio of AIT to profit is right or not,’ he said.

In the meeting, MCCI president Nihad Kabir said that AIT at the rate of 5 per cent at the import stage caused great problems for taxpayers.

‘It is a great concern for companies as the amount of AIT paid at the import stage often becomes higher than the actual payable tax of a taxpayer at the final calculation,’ she said.

Hundreds of crores of taka in refundable AIT of businesses remain stuck in the NBR, she said.

AIT at the rate of 3 per cent may be manageable while 5 per cent is not manageable in anyway considering the country’s economic situation, Nihad said.

She also sought special attention to reforms of tax policies focusing revenue mobilisation, strengthening research and development activities of the revenue board and solving administrative problems to ensure investment and taxpayers’ friendly environment in the country.

Requesting withdrawal of minimum tax on gross receipts of a loss-making company, she said that the provision increased the cost of business of a company, particularly new company, as it usually took several years for the new company to turn into a profit-making one.

Nihad said that the revenue board should gradually reduce the corporate tax rates in the next few years as the rates were still high in the country.

She also urged the government to keep a close eye on the developments surrounding the global coronavirus outbreak so that the government could take steps accordingly and quickly to face the impact on business and the economy.

MCCI tariff and taxation sub-committee chairman Adeeb H Khan raised some problems, including disallowance of VAT rebate for some inputs, intervention of VAT officials in determining VATable price through input-output co-efficient and complexities in the process of central registration, related to implementation of the new Value-Added Tax and Supplementary Duty Act-2012.

He said that the problems were created due to deviation from the original provision of the law as the VAT wing of the NBR made several changes to the rules related to the issues through issuing statutory regulatory orders.

Muneem said that the tax rates might be lowered following expansion of the tax net as a sudden reduction in tax rates without expanding the tax net might put a negative impact on revenue mobilisation.

‘Unfortunately, there is no effective and functional research and development cell at the NBR for conducting research on impact of policy changes and scope for reforms,’ he said.

‘I have already formed an informal team under my leadership to work on research and development and remove scarcity of data for improving the situation,’ he said.

Ensuring investment and taxpayer-friendly environment through simplification of process will be the main priority of the NBR, he said.

Importers to face penalty for delay in documents submission