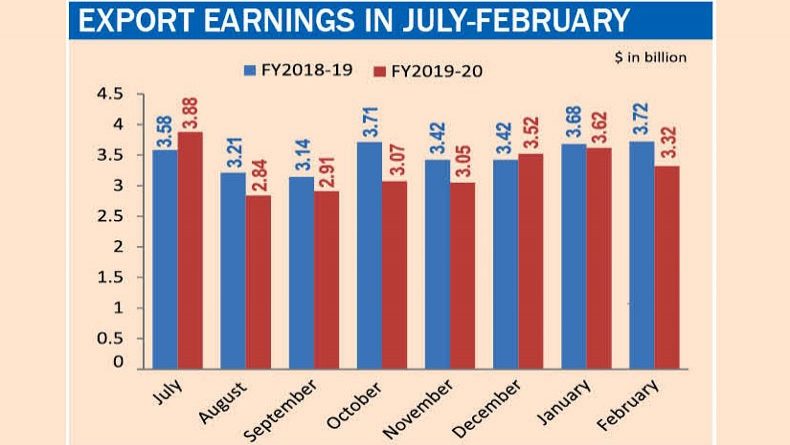 The country’s export earnings in the July-February period of the current fiscal year fell by 4.79 per cent as the earnings continued declining in February amid the coronavirus outbreak in China, a major country for Bangladesh for primary and intermediate raw material sourcing.

The export earnings in February of FY20 fell by 1.80 per cent to $3.32 billion from $3.72 billion in the same month of FY19, according to the Export Promotion Bureau data released on Thursday.

Experts and exporters said that the export earnings continued to decrease in the current financial year as the country was losing its competitiveness and the situation might worsen in the coming months due to the coronavirus outbreak in China.

They said that the coronavirus outbreak disrupted supply chain as most of the manufacturing countries in the world including Bangladesh were dependent on China for raw materials.

Bangladesh would have to face a big fall in export in the coming months as manufacturers might fail to make shipment in time due to the supply chain disruption, experts said.

They also said that the coronavirus outbreak might affect the demand side of Bangladesh’s export as the epidemic soared in many other countries in Europe and America.

The export earnings in February of FY20 witnessed negative growth for the second consecutive month as the earnings in January fell by 1.70 per cent.

After a negative growth in four months in a row, the export earnings in December of FY20 grew by 2.89 per cent.

‘For the last few months, our export was declining due to losing of our competitiveness and fall in prices in the global market. And now the consequence of coronavirus outbreak in China will be added to our eroded competitiveness,’ he said.

Mansur said that the impact of the epidemic would be reflected in the export earnings of April and May as the overall import from China had already declined by more than 20 per cent.

‘Now, we are worried over whether Bangladeshi exporters will be able to ship their committed export orders to global buyers as we must have to face a gap of at least two months,’ he said.

Global buyers also informed that nowadays it would not be possible for any country to make shipment in time without import from China, Mansur added.

Knitwear export earnings in the eight months decreased by 5.17 per cent to $10.90 billion from $11.49 billion in the same period of last fiscal year.

‘It is extraordinarily alarming for the economy that the country’s export was negative for six out of eight months of the current financial year 2019-20,’ Bangladesh Garment Manufacturers and Exporters Association president Rubana Huq told New Age on Thursday.

‘The challenges and weaknesses still remain, and the sector has apparently lost its competitive edge as the price continues to decline, mandatory annual increment of wages has taken place, and our currency still remains stronger compared to other currencies against the US dollar,’ she said.

On top of that, the price of electricity has gone up by 4.9 per cent, said the BGMEA president, adding that coronavirus outbreak was also predicted to have certain impact on the industry in terms of delay in imports, production and shipment hold back, cash flow crisis, and slump in retail sales.

‘The retail market is also not trending well. US clothing retail sales in January went down by 3.1 per cent, which is worst in last 10 years. Shopping malls in few big cities have already started facing the effect of coronavirus,’ Rubana said.

She termed the present time as extremely challenging and said there was no better time than now to support the country’s readymade garment sector for its survival.

The earnings from leather-footwear export in the eight months of FY20 fell by 11.17 per cent to $376.60 million while the other leather products fetched $171.06 million with an 11.19-per cent growth in the period. 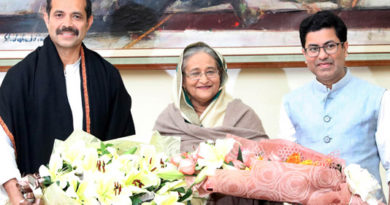