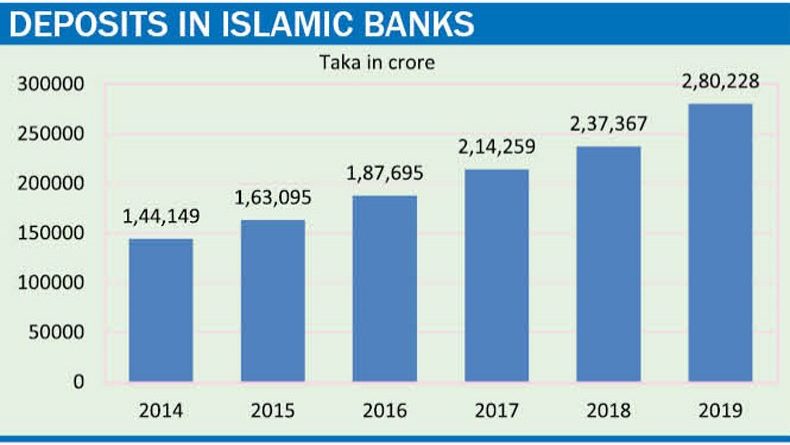 Deposits in the country’s Islamic banks grew by 18.06 per cent or Tk 42,860.9 crore in 2019 with the banks attaining an increased market share among all banks in the period.

The growth in deposits in Islamic banks was the highest after 15.08 per cent growth in 2016, according to Bangladesh Bank data.

Due to the increased deposit growth, Islamic banks’ market share increased to 24.65 per cent in 2019 from 23.50 per cent a year ago, according to a BB report.

BB officials, however, said that stringent compliance with rules and regulations had become very much essential for sustainable growth of the Islamic banking sector.

As a Muslim-majority country, the demand for Shariah-based banking products is on the rise, they said.

To reap benefit of the growing popularity of the banking segment, two of the country’s conventional scheduled banks — NRB Global Bank and Standard Bank — were converted into Islamic banks in February this year.

In a recently published research report, global rating agency Moody’s Investors Service has said that the conversion of two conventional banks into Islamic banks in Bangladesh is credit positive for the Islamic banking sector of the country.

‘A bigger Islamic banking presence will raise awareness among the Muslim-majority population on financial products that are Shariah compliant. The subsequent rise in demand is likely to outweigh the increased competition, which will in turn drive growth and profitability of the sector,’ Moody’s observed.

With the growth of market influence of Islamic banks, the traditional banks are losing market share.

The gradual increase in market share of the Islamic banking represents customers’ growing confidence in the banking system when traditional banks are facing setback to retain public confidence, officials of Islamic banks said.

In terms of investments, known as lending in the traditional banking, the market share of Islamic banks increased to 24.82 per cent in 2019 against 24.04 per cent in the previous year.

Introducing Sukuk or Islamic bond could be an alternative in the upcoming years, the report said.