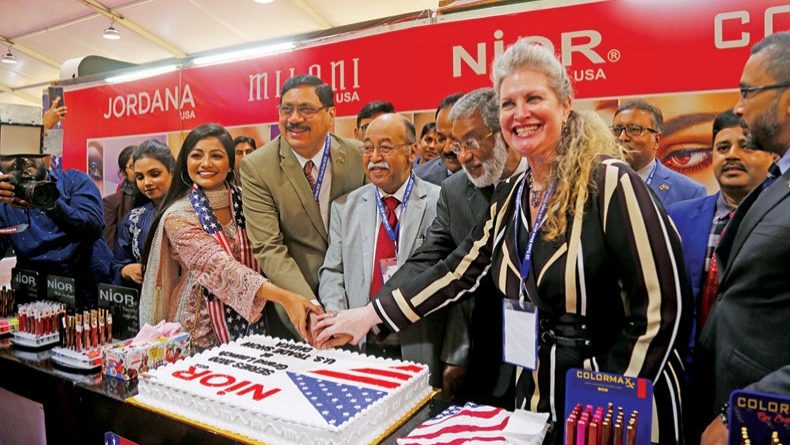 The three-day annual US Trade Show began in the capital on Thursday to showcase American products and services for Bangladeshi consumers.
The US embassy in Dhaka and the American Chamber of Commerce in Bangladesh jointly has organised the 27th edition of the US Trade Show at Pan Pacific Sonargaon Hotel.

Forty-eight exhibitors representing 100 US companies in Bangladesh, including in the energy, agro-mechanisation, and food and beverage sectors, will display their products and services at 78 stalls set up at the show venue.

Humayun said that trade affairs had been liberalised while non-tariff restrictions had been substantially reduced to draw foreign investment to the country.

‘We offer tremendous amount of opportunities in many areas like- energy, infrastructure, communication, agro-business, ICT, tourism and real estate and many more,’ he said.

Our exports to USA represent almost 20 per cent of the country’s total export earnings.

The minister urged the businesses from both the countries to develop mutual relations to enhance bilateral trade and investment.

Bangladesh Investment Development Authority executive chairman Sirazul Islam said that the government is working to build 100 economic zones along with 18 hi-tech parks to attract investment from all over the world.

American investors should come to Bangladesh and create enduring value in the many potential sectors that exists particularly apparel, agriculture, IT, light engineering, leather goods, pharmaceuticals and frozen foods and more, he said.

American Chamber of Commerce in Bangladesh president Syed Ershad Ahmed said that many companies had brought various technologies and ideas that would broaden our knowledge about them.

The outbreak of coronavirus has taught us not to depend on a single nation, he said, adding, ‘We need to emphasise on export diversification.’

US embassy charge d’affaires JoAnne Wagner said that the show would be a platform for developing an understanding between the countries which would help them to explore their business opportunities.

She said that trade between the two countries was $9 billion in 2010, more than double the amount ten years ago. US export to Bangladesh reached $2.3 billion in the same year.

An official said that the US companies would showcase their high quality products and services, expertise and innovations at the trade show in an effort to help both countries enhance their economic relations.

This year, 11 new companies are taking part in the exhibition.

During the trade show, the US embassy will also host four informational seminars.

The show will remain open for visitors from 10:00am to 8:00pm, the official said.

The volume of trade between the two countries increased to over $9 billion in the last fiscal year 2018-2019 from $57 million in 1992 when the first edition of the show was arranged. (Source: New Age)