Lakhs of road transport workers across the country are passing their days in hardship because of the 10-day ban on the movement of all kinds of public transports.

Senior leaders of bus owners’ associations admitted that many owners were not paying their workers now.

Against this backdrop, Bangladesh Road Transport Workers’ Federation, the apex organisation of the country’s road transport workers, demanded food support and protective facilities for the workers.

Currently, most of some seven lakh bus workers, including drivers, their assistants and conductors, get paid on a daily basis while the workers of three-wheelers and easy bikes also are paid daily.

On March 24, road transport and bridges minister Obaidul Quader announced that no public transport but goods-carrying vehicles would ply between March 26 and April 4, also a 10-day public holiday announced on account of the spreading coronavirus (COVID-19).

According to federation general secretary Osman Ali on Sunday, currently around 50 lakh workers are engaged in the road transport sector.

Among them, around six to seven lakh are bus workers, three lakh truck workers, 15 lakh three-wheeler workers and five lakh easy bike workers, all of whom get paid on a daily basis, said transport leaders.

As the ban has been effected, Osman said, these workers, especially the bus workers, have lost their work and income.

Some owners though paid Tk 2,000 to each driver, Tk 1,500 to each assistant and each conductor the money turned out to be next to nothing when the ban came in effect, he continued.

‘We urge prime minister Sheikh Hasina to arrange a food ration system for us,’ he said.

The federation on Friday issued a statement of its acting president and former shipping minister Shajahan Khan and general secretary Osman Ali in this regard, which will be sent to the road transport minister today, said federation leaders.

The statement has sought rice and other essentials at the rate of Tk 10 per kilogram and a special allocation as financial assistance to the workers for the time being.

Bangladesh Road Transport Owners’ Association secretary general Khandakar Enayet Ullah said that they were giving Tk 300 to each of the bus workers daily who were guarding these vehicles.

‘Besides, some owners are helping workers and some are not,’ he added.

Abul Kalam, president of Mohakhali Bus Terminal Owners’ Association, said that he had paid almost half of the due wages to his bus workers for 10 days while many could not give any due to losses for bank loans. (Source: New Age) 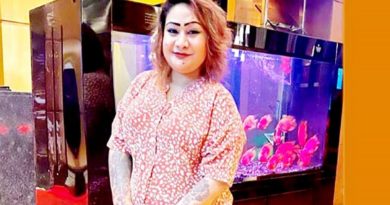