Today is the 80th birth anniversary of artist Novera Ahmed, a pioneer sculptor whose language of art redefined modern sculpture in Bangladesh.

Born in 1939, during a storied hunting expedition in the Sunderbans, the mangrove swamp of the Gangetic plain, Novera’s name is forever attached to an influential mode of practice which was at once modern and indigenous. Though her work went through many phases and they yielded many different interpretations, her celebrated early works instituted a fusion between the Bengali rural art forms she so zealously felt attached to and the formal rigour of the European avant-garde she picked up during her training in London.

Novera was responsible for the very first outdoor sculpture in the then Pakistan. The work entitled ‘Family’ was installed at the front porch of the house in Dhaka’s Tejgaon area of then famous industrialist MR Khan.

Her solo sculpture exhibition in Dhaka in 1960, with which she burst into the nascent art scene, was also the very first solo sculpture show in Pakistan. Organised in the open space around the Dhaka University library and entitled ‘Inner Gaze’, the exhibition showcased the end results of three years of rigorous creative action at her studio. It confirmed her status as a serious practitioner and brought her overnight fame.

Novera fell into oblivion after she left Dhaka in 1963 for Paris. Bangladesh’s independence in 1971, did not change that fact as institutional practice failed to recognize both the vitality and the newness of her works. The activities of the Shilpakala Academy also had no bearing in tracing her contribution to the art scene. As a country where art history never took off the way it did in India and Pakistan, Novera, at one point was also declared dead.

The rumour of her death began to circulate since 1989 through word of mouth. It appeared in print in a Women’s Directory by Bangladesh Writers’ Association in 1995. It is a proof that not many among her enthusiasts were well informed.

In spite of the fact that she has been the subject of a major Bengali novel entitled Novera by Hasnat Abdul Hye, which was first published in an Eid supplement of a national daily in 1994, and then in a book format a year later, in the public imagination she remained only a mythic figure.

The fact that Novera met with an accident in 1974, after which her creative life was curtailed, also had a bearing on the collective amnesia at home.

It took a lot of work by true Novera enthusiasts to restore the figure of the sculptor, one whose works scarcely been appraised in relation to the idioms the rest of the moderns gave rise to since the 1950s. It was in the late 1990s that the work to reinstate the artist was under way which concurred with the emergence of a number of researchers, including Lala Rukh Selim, an artist and writer who first instigated some of the relevant debates around Novera’s place in art history. Lala Rukh’s articles and essays pointed out how in a patriarchy the memories of one of the most important woman artists were simply allowed to fade away.

It was in late 1990s that the tide began to turn. In 1997, Novera received Ekushey Padak, the second highest civilian award in Bangladesh.

Novera, whose flamboyant personality and unconventional lifestyle fed the imagination of the cognoscenti of her time, had to face several misfires in her early life. She was married off to a noble of Chattogram, a marriage that simply ended in a wreck. She aspired to become a dancer and even travelled to Mumbai to receive training in classical Indian dance, but a small accident stood in her way. What panned out was her sojourn in London where she studied sculpture between 1951 and 1955 at the Camberwell School of Arts and Crafts that laid the ground for her future artistic practice.

She spent her first three years in Britain to acquire a diploma. She studied sculpture under the Czech-born artist Carol Vogel. She had also been introduced to Jacob Epstein and was lucky enough to work in his studio in London. Later, in Florence, Italy, she received further training under the aegis of sculptor Venturino Venturi.

Novera’s seminal solo exhibition in August 1960 was as much an outcome of her training in Europe as it was a result of her creative spurt after she returned to Dhaka in 1957. The monolithic sculptural trope, Novera’s signature, also dispersed into many facets in the next few years.

Her solo exhibition of sculptures and paintings at Galerie Rive Gauche, Paris, in 1973, testified to the changing patterns of her practice. The dehumanised concrete motifs of her early years, built to give a sense of volume, gave way to small-scale, expressionistic motifs. This departure from the avant-garde to a rather primal mode of creation has been an unpopular topic.

Her sudden death in May 2015 finally ended her self-imposed exile in Paris, adding another layer to the apparently unsolvable puzzle her personal life once became to people who were inquisitive about her lifestyle and her uncontained artistic spirit. Though her death finally drew the curtain on the past she herself was not particularly willing to fully unveil, enthusiasm about her life and art has only grown. (Source: New Age) 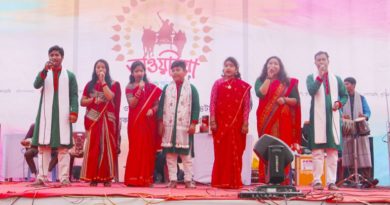